Framing up a Mudroom Bench in a Nook Grandma-who-likes-to-sew took a little trip a bit back, so we hijacked her side of the Momplex and got to work on a project we didn't quite get finished up before moving day. 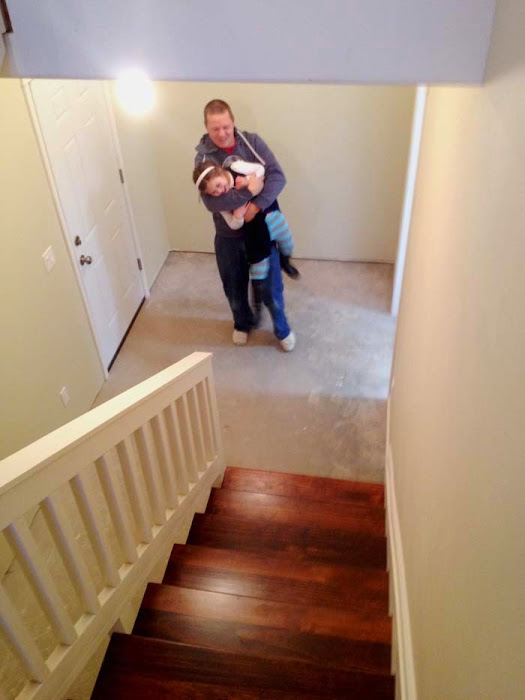 Downstairs, where the stairs land, between the garage and the bonus room (which will hopefully someday become Grandma's craft and sewing room), is a little area that will make a perfect mudroom.

In Alaska, where coats and boots are used like shirts and shoes, a mudroom is essential to a home.  The space here isn't very big, so we'll need to plan cleverly to make the most of it.

The only real place we have to add storage is on the far wall, between the two doors. 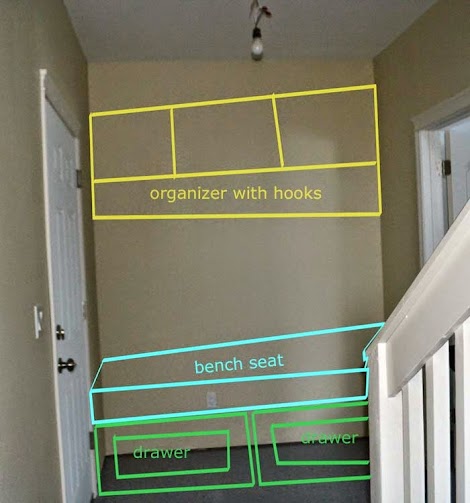 Grandma definitely wanted a bench seat for family and guest to sit down and take their boots off.  Under a bench, there should be storage for boots and shoes, but to make the storage more attractive, I'm going to build drawers.

Up top, cubbies for hats and mittens and scarves will sit above a row of hooks.  I'm going to convert Grandma to my lazy ways ... who needs hangers and closet rods when hooks are so much easier?  Don't judge me.

So we got a plan in place, and we'll tackle it in steps. 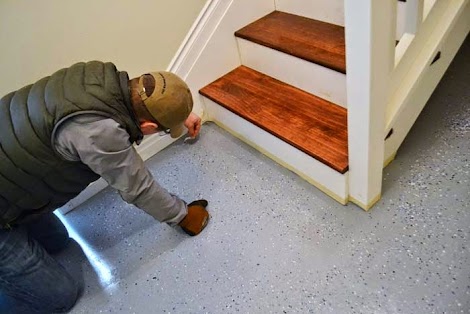 We are already one step ahead of the game when we painted the concrete floors last fall with Rusoleum's Epoxy Shield Garage Floor Coating Kit - best $99 spent on the Momplex!  No chipping or scratches, several months later.

So now it's time to work on that mudroom storage system!

First up, the bench.

For the bench, we wanted something above all that was sturdy.  We decided to build a built in bench, using the studs in the walls as legs and supports for the bench.  It will be like a mini floor built into the nook area. 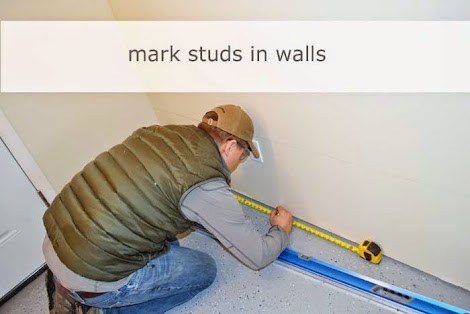 First up, we found and marked all the studs. 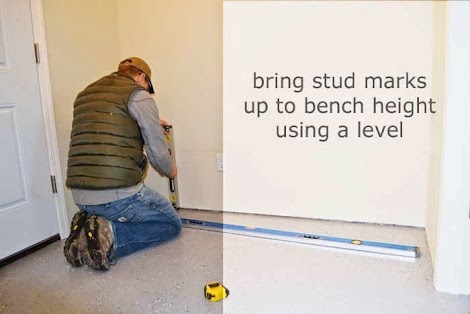 Then we used a level to mark the studs up the wall. 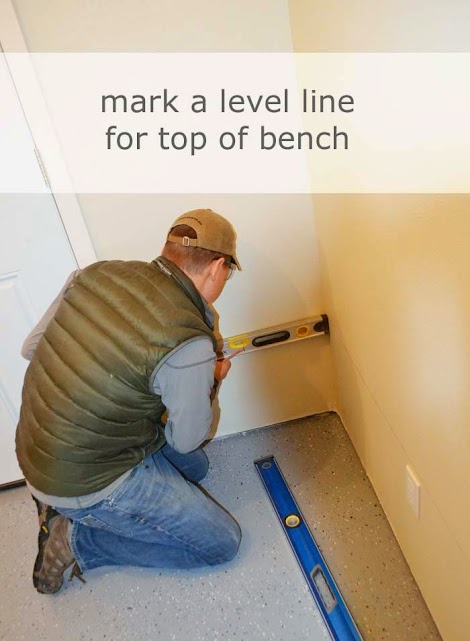 Then we picked a height for the bench, and drew a level line around the entire nook area at the height of the bench minus 3/4" (since we'll be using 3/4" plywood on top of the framing, we brought the line down 3/4" below the desired bench height). 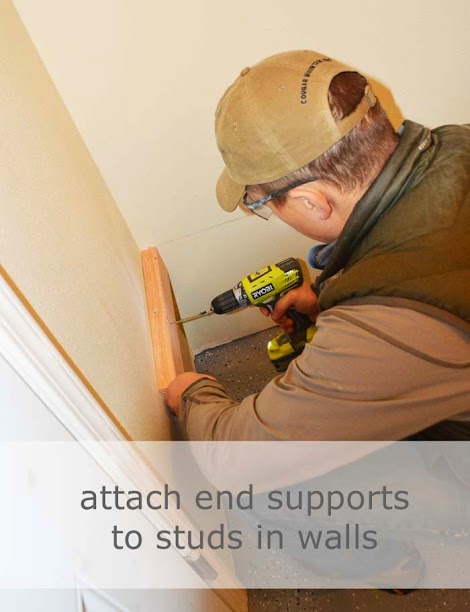 On each side of the nook, we attached 2x4 boards to studs in the walls by predrilling holes and with 3-1/2" screws.  You'll want to hit two studs to avoid the bench from pivoting forward or having to add front legs. 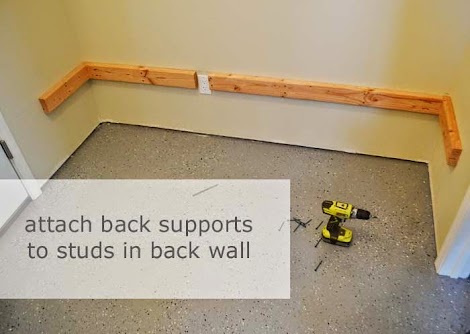 Then we attached boards along the back to studs in the wall.  There was an electrical box, so we just cut the boards around it (it will still be accessible from underneath). 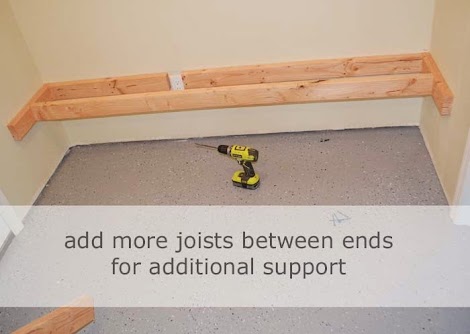 Then we just added a joist in the middle.  Depending on how wide and how long your bench is, you'll want to add more joist (more joist = more support).

We attached our joist with pocket hole screws using our Kreg Jig, but you could also toenail the joists in or use 2x4 joist hangers. 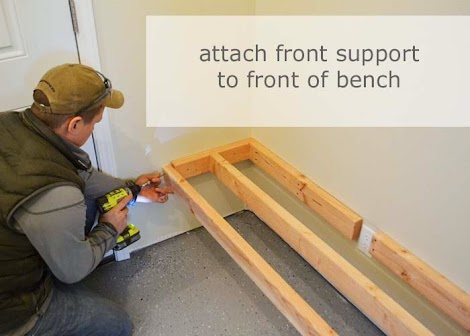 Then we added another 2x4 to the front to tie everything in, just predrilling and attaching with screws. 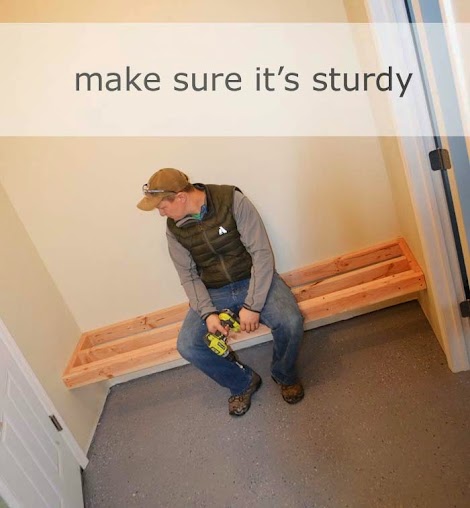 Then we took a break.

But we pretended like we were testing out how sturdy the bench was.  And contemplating adding front legs, additional joists, or just going with it.

But it got a little rough sitting on the 2x4 joists, 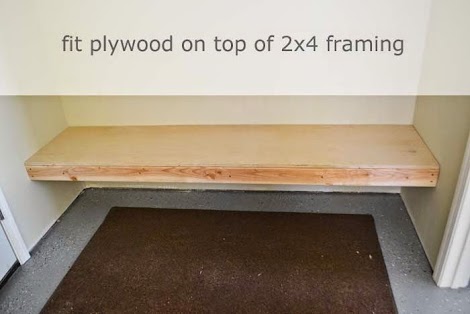 So we cut a piece of plywood for the top. 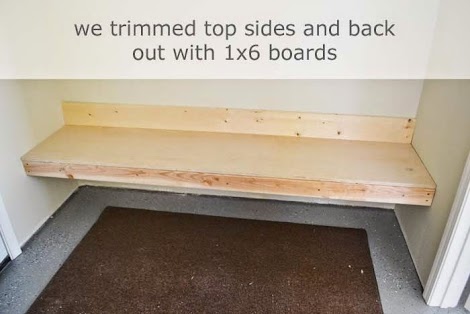 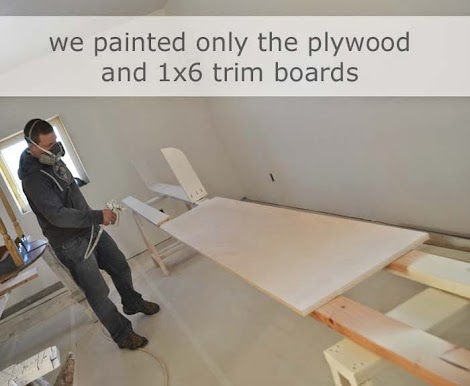 Then we took all the trim pieces (the plywood and 1x6 boards) and painted them, and let them dry. 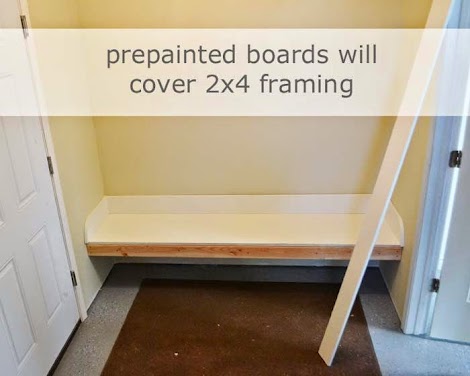 And then brought the prefinished boards back into the nook area, and set them in place.

Good thing we didn't hand brush because I can pretty much guarantee I would have sat on the wet paint.  There's no doubt. 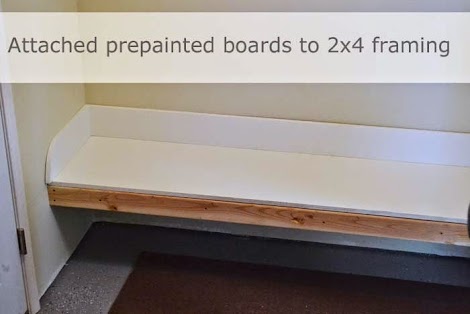 Then we attached the prepainted boards to the wood framing with a finish nailer and glue.  We then filled the nail holes with wood filler and did a touch up coat of paint over the nail holes. 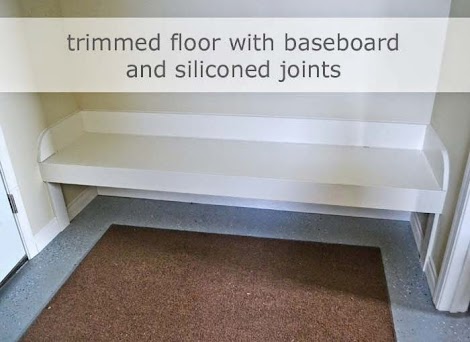 After the bench was built, we did end up deciding to adding two legs to the sides, attached to the wall.  This will give us a square area for the drawers to fit between.

We used the following materials to build this bench (measuring 18" wide by 6-1/2 feet long):

For a grand total of $43 for the sturdiest mudroom bench ever!

We'll be adding drawers underneath, testing my sewing abilities for a cushion, and a organizer with hooks on top - so stay tuned for that!

PS - If we made this bench a little wider, and hung it taller, wouldn't it make a great loft bed?????

If the bench was wider and

If the bench was wider and deeper, 24x95", would you need to add a support in the middle? Thanks!

Did this question ever get answered about the max length for this mudroom bench.  I love it, but my space is about 10 feet long.  Was not sure if you think I would need a support leg in the middle.  It seems study enough for someone sitting on it, but thought I would ask the expert. In reply to If the bench was wider and by marrybeth

I don't think you do. I see theyve used 2 tubafors in front and one in the middle. as long as the sides are attached with good Loooong screws, like 4inchers, it should be good

Thanks for sharing, I love this!